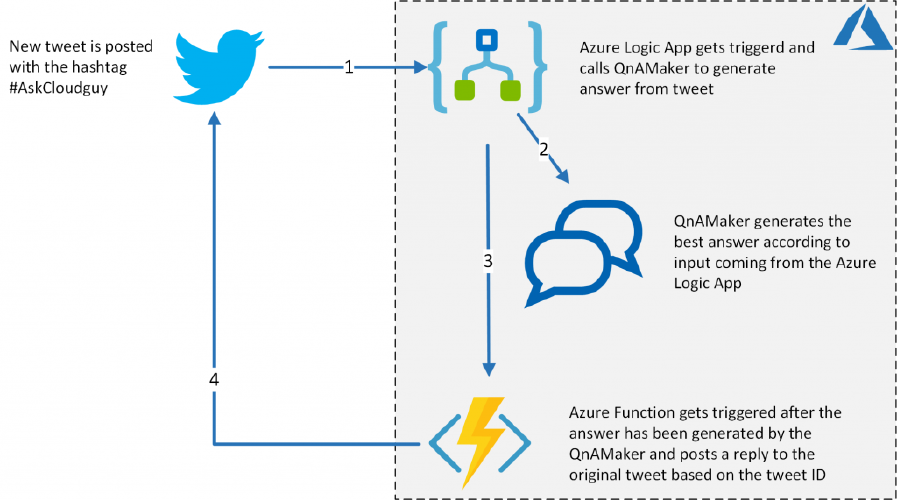 The idea of this solution has come to my mind a couple of months ago when doing a couple of conference sessions. During the sessions, I had some questions coming from the audience, which is a good thing for me, but somehow I noticed, that those a more or less general questions rather than deep technical ones.

Therefore, I thought it would be helpful for me as well as for the audience to have a much simpler way of asking me questions during speaking engagements, but also whenever someone has a question which might be answered by me. And which social media platform would be suited better than Twitter for exchanging short messages which might be of interest to a broader audience? So the idea of my #AskCloudguy Twitter Bot was born. Feel free to implement your very own Twitter Bot based on a specific hashtag in order to build an automated Twitter QnA service for your followers based on the following solution.

The main architecture of this solution is basically reflected by the following illustration:

The only thing you have to do is to create a new knowledgebase within the QnAMaker service and populate it with QnA pairs:

The Azure Function is the service where the actual Twitter reply action happens. In order to connect to the Twitter API I decided to use the Node module Twit which needs to be installed by running the following command in the function’s console first:

After the module and it’s dependencies have been installed, it’s time to update the application settings of our Azure Function, but first we need to gather the keys and secrets by Twitter. So head over to the Twitter app portal and create a new app in order to gather the following keys and secrets:

After you have copied them somewhere, we need to add those four variables to our application settings of the Azure Function in order to keep these secrets and keys out of our code:

Now that we have that in place, we can update/replace the code of the function by the following code:

The design of the Azure Logic App looks as follows:

Feel free to implement your very own hashtag. Please make sure to replace the Uri of the Azure Function with the correct Uri of your Azure Function.

Now we have everything in place we can test the solution by posting a new tweet with a question which is part of a QnA pair in our QnA knowledge base and check if the reply is being posted to that tweet accordingly:

Now that’s it. You build your very own QnA Bot for your very own Twitter hashtag. If you have any questions please feel free to contact me - try it out by posting a new question on Twitter with the hashtag #AskCloudguy and my Bot will reach out to you ;) 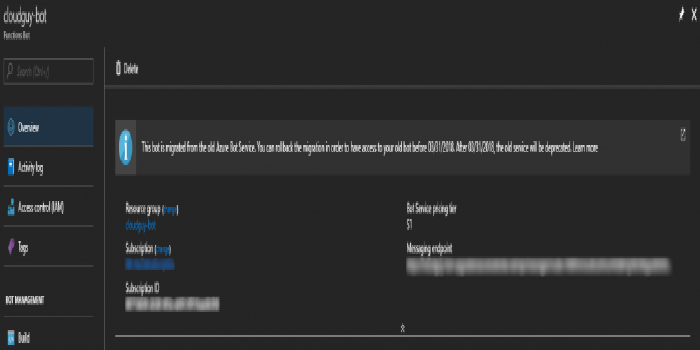 Microsoft has GAed the Azure Bot Service a couple of weeks ago, which was a huge step forward for all of us who are doing bots and AI apps in the Microsoft ecosystem. With this step, Microsoft is also pushing one more area into the Azure portal which is bots. Remember, during the preview, you had to create your bot in the Bot Framework portal and add your channels and everything related to your bot in that specific portal. 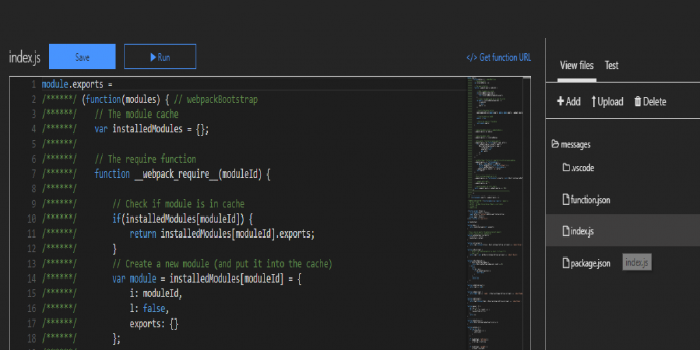 Have you ever faced the issue of looking at more than 200.000 lines of code after creating a freshFunctions Bot via theAzure Portal? Well, I have unfortunately and I didn&rsquo;t know where to put my code in this massive amount of NodeJS code. As a lightweight developer, I am not that familiar in reading someone else&rsquo;s code so I didn&rsquo;t want to spend hours in studying the code below in order to get an idea where to put my code into. 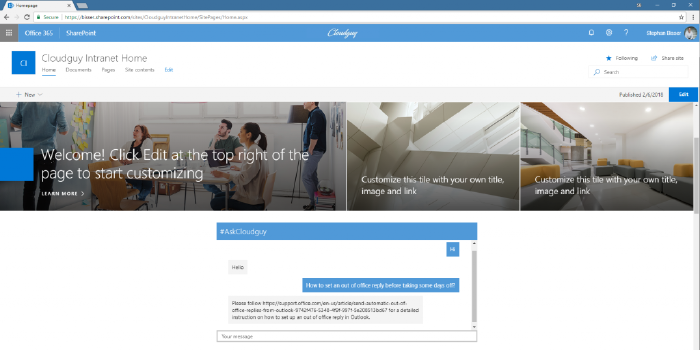 The terms &ldquo;Modern Workplace&rdquo; or &ldquo;Digital Workplace&rdquo; is something every one of us have heard about in the last couple of months probably. It is some trend which should improve the workplace situation in order to digitally transform the way we work and make it more easier to communicate and collaborate with others. Therefore, the use of smart services can be beneficial when it comes to really transforming your workplace into a modern one.